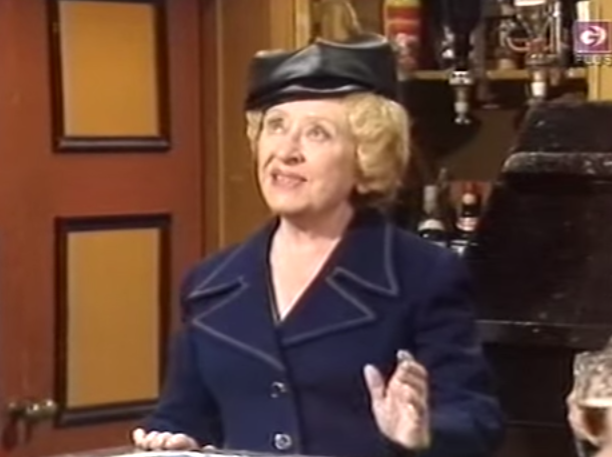 Mrs Walker’s driving ensemble. I want to marry it.

You’re probably sick of me overthinking Ken Barlow by now, so perhaps I will turn my attention to overthinking Mrs Annie Walker, Rovers Return landlady, behaviour regulator and overall status-grubber. Because Coronation Street is quick to punish those getting above their station, her aspirations and faux-poshness are ripe for ridicule. As I was watching these episodes, however, I began to wonder about how the show constructs the audience for these mocking storylines. Are we meant to be laughing at Mrs Walker because we identify with the unashamedly working-class? In that case, why are Hilda, Stan and Eddie, the lowest on the totem pole, also often associated with hilarity and mockery? We laugh at them too. But ah, you say, we laugh at Hilda because in her own way, she is trying to get above HER station by emulating Mrs Walker (remember, her wallpaper escapades from some episodes back were an attempt to imitate the landlady’s redecorations). It’s “know your place” all the way down. This led me to pondering whether the Street’s audience is constructed as upper-middle class: do we exist in a place where we can laugh at everyone aspiring to what we have? That seems strangely mean-spirited for a show that often treats working people’s lives and desires with dignity and generosity. It’s true that the audience – and, indeed, the non-social climbing characters – see themselves as “real” rather than fake; we understand the pointlessness of pretending, since other people can see right through it. Perhaps the construction of the audience is even more idealistic than I have at first supposed: are we meant to exist *beyond* class? Does Coronation Street imagine a place in which petty social climbing of all kinds no longer exists? Thus, we laugh at it because we have perspective?

It may be a mildly problematic combination of all of these things – we laugh at foolishness, but also at aspiration. In any case, I’m not going to let it spoil my enjoyment of Mrs Walker’s driving lessons, for which she is kitted out in the sort of ensemble suitable for playing bingo with the Village People. 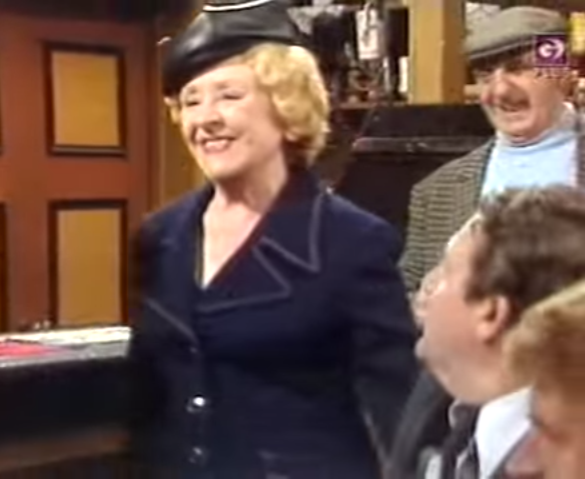 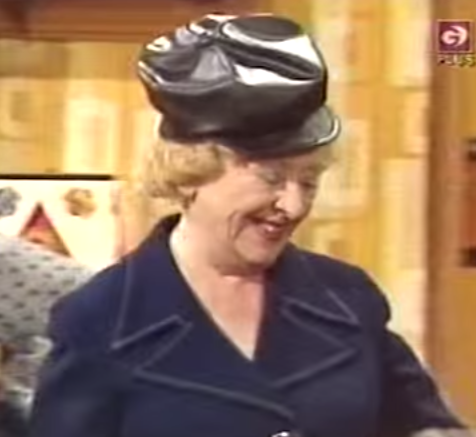 Whitney Houston was singing “The Greatest Love of All” about this hat.

It was bought, of course, in Sylvia’s, where Mrs Walker’s doubts about donning slacks (remember when that was controversial? I do. Barely) were assuaged by Elsie in this fashion: “Come on Mrs Walker, if it’s not too late to start driving lessons, it’s not too late to wear trousers.” The simulation lesson goes well enough but after her first practical road-based outing, Mrs Walker suddenly disappears to “her Joanie’s” for a visit. There is much speculation about what might have happened, particularly from beady-eyed Hilda. “Summat’s happened on that driving lesson. And she’s gone off because she doesn’t dare show her face…. we’ll get to know. Muck always rises to the surface in the end.” An unconfirmed clue in the form of a phone call from Nellie Harvey appears – she reports that she saw a driving school car being towed away after a crash.

Plonker Ernest is still moping about the place, taking in washing and fending off needling remarks from all and sundry. Mrs Walker attempts to be kind: “Everybody’s doing it these days, swapping roles, it’s –” “No disgrace, no, none at all,” says Ernest, his stricken face giving the lie to every word. Hilda comes right out and tells Ernie he’d “make somebody the perfect wife”.

I wonder how white their whites get hanging in such grim environs?

Ernie isn’t such a “perfect wife” that he’ll do the bloody ironing.

Given this constant aura of gender-role judgement it’s no wonder Ernest jumps at the chance to play the piano two nights a week at the Gatsby club, even if one of the nights is a “stag”, at which a stripper and a blue comedian perform. “There’s nights and NIGHTS, isn’t there, in places like that,” says Hilda judgementally. (Betty has had quite enough of judgey Hilda and tells her “the only reputation you’ve ever had is for yakking, tooting, and generally muck-raking.”) You will recall that Ernest got into rather a lot of trouble for attending one of these stag nights as a customer earlier in the year, but even grim-faced Emily can’t dissuade him. “Tell me, do you need your music for the stripper, or can you play that kind by ear?” she says, witheringly.

Another great drama of these episodes is the discovery that Gail’s fancy-man is, as suspected, married with children. Gail refuses to believe this for quite a while. “I happen to be kinky for monsters, ” she says simperingly to him. (OH MY GOD, GAIL. If only you could see some of the chaps you wind up marrying in the coming decades you’d realise this is your most prescient line of dialogue ever.) 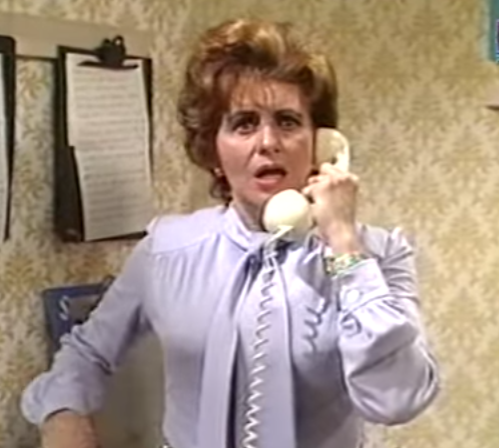 Elsie’s face when she’s talking to The Wife.

Pregnancy obviously agrees with Deirdre, as she has been a delight in these episodes (and has given this post its title). Ray doesn’t much like her new looks: “Talking about freaks, what have you done to yourself?”

Deirdre is wearing this bead-heavy boho ensemble and Ray’s… area is very… constricted. I am concerned that he may not be able to father any more children.

But Deirdre is unfazed. “Us with mercurial temperaments usually have brains.”

Deirdre is also giving Gail-the-married-man-shagger no quarter after Gail ignores her advice about kicking her curly-haired Lothario to the curb. “I can tell you this, love. From now on you can stew in your own flamin’ juice.”

At one point she also says to suspicious-of-foreigners Ray “we don’t get much trouble with t’KGB round ‘ere” which, as a sentence divorced from any context and delivered in a thick Weatherfieldian accent, delights me no end. Viva pregnant Deirdre!

Holy Crap That Was a Reference To Bertolt Brecht Corner

And speaking of Deirdre, in her capacity as secretary for Len Fairclough’s building company, she mistakenly turns down a big contract because she thought they were too busy. Len, to Ray: “Mother Courage here has said that we couldn’t fit it in!” The ways in which this show surprises me are many and varied. Mother Courage, upset after being yelled at by Len

The contract is salvaged and the stage is set for a showdown with some rival builders. You can tell they’re baddies because they’re Cockney and they have facial hair. Anyone coming oop north from daaan souf cannot be trusted!

I would say this was the hat of the week, but have you seen Mrs Walker’s driving cap? Go on. Scroll back up and drink it in. 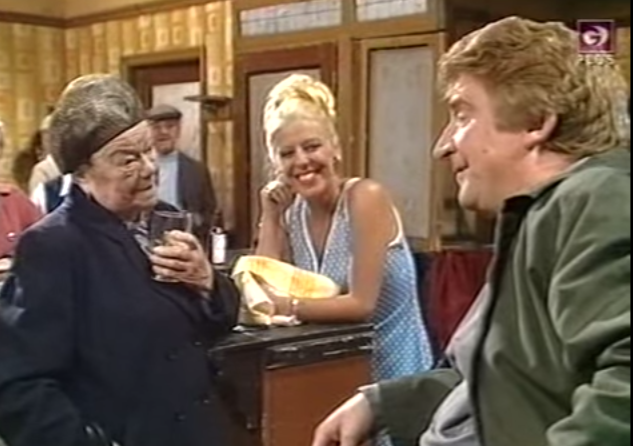 Sometimes Coronation Street mentions New Zealand and I am, of course, duty-bound to report these moments. Ena, of some acquaintances: “They emigrated to New Zealand. I believe they’ve done very well for themselves. Though they were as thick as two short planks.” JUST WHAT ARE YOU IMPLYING ABOUT MY HOMELAND, MRS SHARPLES?

Sparkling Dialogue I Can’t Bear To Leave Out Corner

“Three things that should never have been invented: eight o’clock in the morning, twenty-year-old blondes, and plums.” – Rita in a philosophical mood

“According to him, everybody’s either bent or on the fiddle.” – Rita, of Eddie (and possibly my new epitaph)

“That’s extortion, that is, with a capital X.” – Eddie, of Rita’s cafe prices