This has been an unconscionably long hiatus, during which all of YouTube user Auntie Corrie’s vintage Coronation Street playlists were deleted thanks to ITV getting unreasonable about copyright violation. (It’s a bit rich of ITV to get all precious about this, since they haven’t released the complete run of episodes for purchase anywhere.) I am therefore remaining deliberately vague about where I’m now, with some difficulty, watching them. There are still some episodes I can’t find, but we’ll struggle forward anyway. I also lost my job as a researcher, found another more time-intensive one as a librarian, and went on two big trips. All of these things affected my blogging progress adversely. Still, onward! Do we even remember what was happening? Something something Bet’s cleavage Ernest the plonker Ken eating salad? Righto then.

The episode from the 18th of August appears to have been lost to the mists of time and copyright violation; I think I got halfway through it before ITV exercised their power as our evil overlords, and I didn’t get screenshots. Still, our invaluable friends at Corriepedia inform us that Ray discovers a load of plumbing stock has been stolen from the building site they’re working on, and Len tells the contractor. Jack Barker (Orange Hat) and Doug West (remember, the dodgy blokes from dahn saaf?) do indeed steal tiles from the site, and Len and Ray are deeply suspicious. Meanwhile the stripper from the Gatsby club, Josie Steel, goes through her routine at home with Plonker Ernest (depressingly for us all, she’s fully clothed at the time. I’m really keen on seeing 70s foundation garments!). Emily walks in halfway through and lays the hammer down, then goes to the Kabin and has a showdown with Rita, who throws her out when Emily basically calls her a stripper!

None of you have watched Fuller House, right? Good.

IT’S SO TRAGIC WE HAVE NO VISUAL RECORD OF THIS.

The Bishops apologise to each other and Plonker Ernest tells Emily that he’ll give the job up. I think I speak for us all when I say damn, damn, damn. This was ripe with possibility. And boobs.

How much Mavis is looking forward to meeting Derek’s mother.

Mavis is taken (rather unwillingly) to meet Derek’s mother. On the motorway! In a car! This visit is cringingly awful, as Derek’s mother is a complete martinet and Mavis is in full terrified witter. Derek and Mavis’ unmarried flit to the Lakes for a holiday is given a full puritan going-over, followed up with some rather pointed remarks about the advanced age of both parties, leaving Mavis in a jellied heap on the drawing-room sofa. (Also, dude, Mavis is apparently 39! I… was not expecting that. At some point Mrs Wilton makes reference to a “Dr Crippen“, who was apparently the first wife-murderer to be caught with the aid of wireless telegraphy. The more you know!) 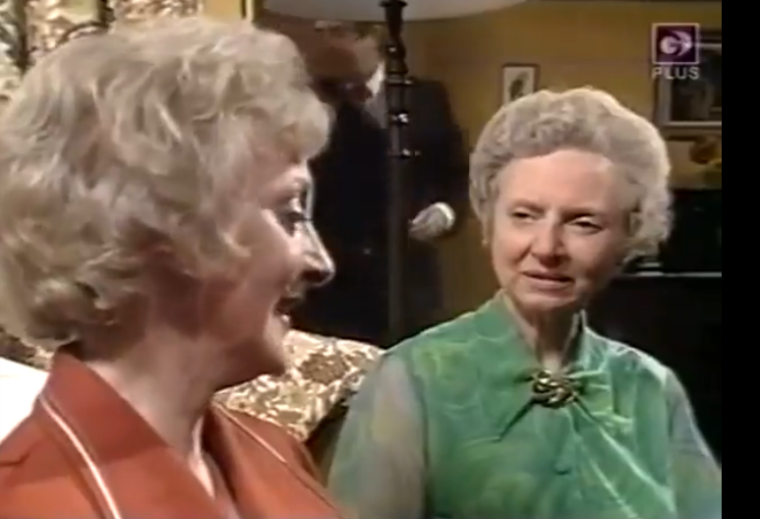 This is not a look I would want to see from my future mother-in-law.

I love the shot choices in these scenes, in which Derek and Mavis seem lost in huge rooms presided over by his mother. 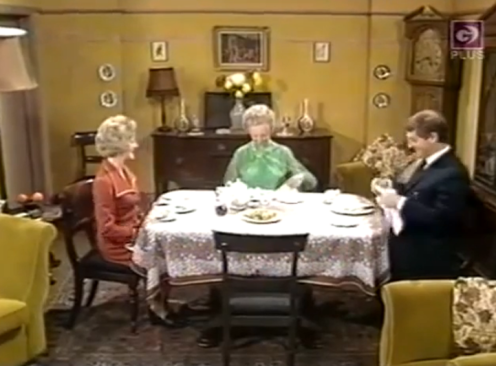 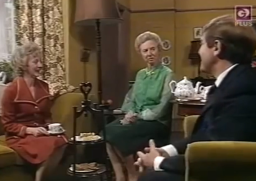 Mavis is sent out to the greenhouse to look at her would-be mother-in-law’s “vine” (a greenhouse! A greenhouse! This is the middle-classest thing of all! One could even grow ingredients for SALAD in it!), and Derek is told emphatically by Mrs Wilton that Mavis will “not do”. “She’s nice to the point of being a walking ice-cream sundae! But that’s not the point – she’s also YOU in a tweed skirt!… Neither of you could decide what time of day it was in a room full of clocks!” Aw, poor Mavis. Also, ouch, truth bombs. “Any mother of Derek’s would eat prospective daughters-in-law and spit out t’pips,” says Rita wisely during the post mortem in the Rovers.

2. Mrs Wilton. This is more terrifying than anything I could imagine.

3. Derek, staring into the abyss.

Speaking of going places in cars, Mrs Walker returns this episode from her suspiciously sudden visit to her daughter’s after her first driving lesson. You will recall that there is some speculation that she crashed the driving school vehicle, but it’s more than Bet and Betty’s lives are worth to ask her directly. Betty obliquely refers to Mrs Walker having a “rest” and is coldly shut down. “The Evening News is a good paper if you’re looking for a job, love,” says Bet after witnessing their exchange. Ooof. Bet mentions pointedly to Mrs Walker that “some lady” had “bashed” another car at her driving school. “I wonder who it was?” says Mrs Walker, all innocence. Bet ponders whether the general public of Weatherfield should be warned that another lesson is in the offing. “They are our brothers and sisters out there, Betty, roaming round the streets, unaware of what is going to lurch round the next corner like a demented kangaroo.” These two though. (Also, check out the ice bucket!)

There is nothing better in the world than the women of Coronation Street cackling over some absurdity.

The mystery is solved when the driving instructor informs the pub at large with the, uh, encouragement of Mrs Walker, that a dray horse kicked the vehicle – although he does seem rather nervous about his tale. Mrs Walker heads off to “burn rubber” for her next lesson, triumphant once more. “Off into the bright blue yonder, as our fighter pilots used to say.” Bet, the eternal smartarse: “Some of ’em never came back, Mrs Walker.”

It’s all kicking off at the building site as the tile theft is discovered and Len reports it to an unseen supervisor. Daan Saaf with the Orange Hat declares that this is “victimisation by a member of another union!” (This is the kind of thing that sends me down a rabbit-hole of research: wouldn’t they all belong to the same union, as builders? Were there several competing unions? Was it regional?) In any case the southerners strike because orange hat has been accused of theft, an action which he smugly calls “industrial democracy”. (I am amused by the small-c conservatism of Coronation Street here: it’s all very well to have unions, it seems to be saying, but not if they’re used as an excuse for skiving off work. Heh.) The supervisor appears and gives them a bollocking and their strike lasts all of five minutes. Have the courage of your socialist convictions, lads!

The supervisor – who my husband notes looks like John Malkovich in Rounders – meets a convention of silly-hat wearers.

Unfortunately the only conviction likely is a criminal one for Orange Hat, as he sabotages some scaffolding while Len is away. It’s Ray Langton who eventually comes a cropper and is taken away in an ambulance! Flamin’ ‘eck.

Ray watches a bit of building site descending upon his head at speed.

One of Orange Hat’s friends confesses to Len and Terry that the scaffolding was deliberately meddled with, and Things Are Tense. “I’m gonna thump you for being a thief, a layabout and a lazy bastard,” says Len menacingly to Orange Hat. Two of those things seem kind of similar, but the line and the following punch-up are delivered with such gusto I’ll forgive him.

Cliffhanger: Gail appears and has been cited as “co-respondent” in the divorce of the married chap she was seeing earlier! I can’t wait!

That Gail. Such a femme fatale!

During these episodes there were so many fun facial close-ups at the building site that I amused myself with the theory that Len, Ray, Terry and Orange Hat were recreating the video for Abba’s “Knowing Me, Knowing You“. 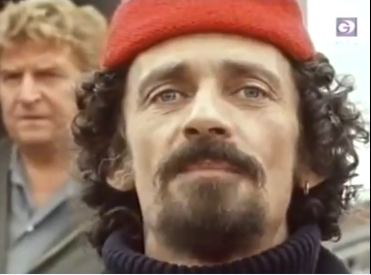 “There’s only one thing worse than staring at a typewriter all day, and that’s going out wirra fella who collects beer mats.” – Deirdre

I can’t tell you how many screenshots of Deirdre I take. SO MANY. 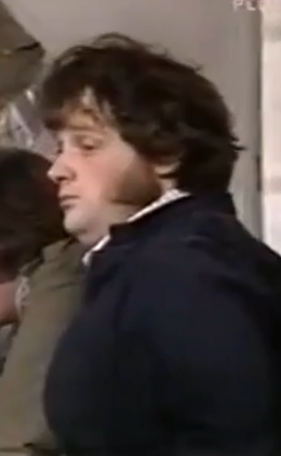 Let’s all take a moment to appreciate the sheer glory of Terry’s muttonchops.

Who has ever poured boiling water like this? I do not understand. Nor, by the looks, do Terry and Ray.